Recovering from a PR Scandal 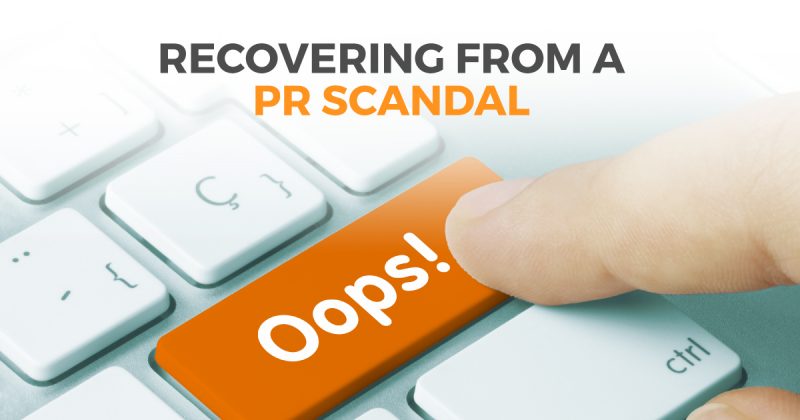 Possibly intensified by social media, the past few years have seen quite a few major scandals erupt with damaging consequences to the top brand names. From United Airline’s backlash after forcibly removing a passenger on a flight to Facebook’s chaotic analytics outrage, you can see how one little mistake can tarnish a corporate brand in the blink of an eye leading to an ongoing scandal, a drop in consumer trust and ultimately a loss in profits. Coming across a scandal of your own is almost inevitable across the life span of a business, but how your company handles its scandal it completely within your control. If you suffer a PR scandal, regain control of the narrative in just a few key steps:

If a company admits to a mistake only after being caught and the public has reason to believe the company knew of the mistake beforehand, the admission can come on as obligatory and insincere. However, if you admit the issue upon discovery, it shows you’ve made an honest mistake that you’re seeking to repair, which can even renew or reinforce trust. It also allows you to apply your own messaging before a narrative is set in stone which allows you to reassure consumers that the issue is a one-time mistake rather than a systematic problem.

2. Have a crisis plan in place

Companies have crisis plans for all kinds of situations, but they often lack concrete steps for scandals since issues can be complex and unique. An adaptable plan, however, can provide guidance and reassurance to members of your team when a crisis hits. Even in cases when you’re just monitoring the situation, a plan can identify reliable checkpoints at which action becomes necessary (such as media coverage) so that your company won’t make the common mistake of waiting too long to address the problem.

3. Monitor and listen to social media

Social media helps you see things from your customer’s perspective which enables you to adapt quickly and effectively to crises. If there’s a problem with your brand, social media can let you know. Listen to consumers, even ask them questions, to find out the problem firsthand and update them on your progress as you work to resolve it.

When you’re accused of doing something wrong you really only have two options: apologize or stand your ground. In the majority of cases, it’s best to apologize, however, when someone accuses your company of doing something it hasn’t actually done and you can prove it, defend yourself. Dampening a scandal is important when the mistake exists, but when someone tries to conjure a scandal out of thin air, it makes no sense to allow that scandal to go forward and damage your brand.

Like we said, scandals are inevitable as the mistakes they stem from. Thankfully, the true threat to your brand is something that you can control – your own actions. How you handle the issue can determine whether your brand is critically damaged, temporarily tarnished or hopefully strengthened. By sticking to the values of proper planning, thinking like your consumer and putting your brand before your short-term bottom-line, you can turn what looked like a crippling mistake into an opportunity to prove your company’s character and win long-lasting trust from consumers.