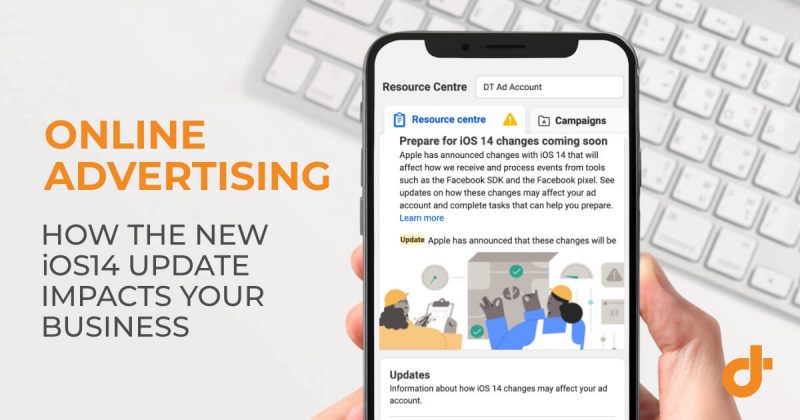 There’s been tons of talk within the digital space about Apple’s iOS 14 update and the way that it relates to businesses, especially in regards to Facebook and Instagram advertising. This update seems to be a rather daunting threat for businesses who are unsure of what impact this change can have on their businesses advertising efforts.

As a Design Thinker at The Design Thinking Agency, I can help your organization navigate through the iOS 14 update so that you can mitigate the risks associated with it.

To ensure your organization gets the most out of your marketing and advertising efforts on various online platforms, continue reading to learn more about the IOS 14 Update.

Many resources are outlining the impacts of the IOS 14 update, particularly from Facebook itself.

To summarize, Apple announced changes with iOS 14 which will impact the way Facebook receives and processes conversion events from tools like a Facebook pixel. This means any business or organization that promotes their services on mobile apps, and those that optimize, target, and report on web conversion events, are going to be affected.

Apple will now prompt users within the App Store who are using an IOS device for permission for the app to trace them outside the platform in several ways.

These new iOS 14 updates will certainly restrict the collection of data unless people opt into tracking on iOS 14. To give a relatively similar example it is similar to sort of cookie tracking on their website rushed to determine prompts in response to the GDPR requirements.

If iOS users elect to opt-out of Facebook’s tracking, the consequences for businesses may result in the following:

This update can be harmful to the revenue of Facebook. Consistent with Statista.com, 79.9% of users on Facebook only use the appliance on their mobile device compared to 1.7% who use it on desktop or laptop computer. The remaining 18.5% use it on both.

Out of that 79.9%, there’ll be an outsized portion who are going to be using an iOS device with the iOS 14 update. From that number of users, there’ll be a percentage who will allow the app to trace their data but what percentage of which will be is unknown and unlikely to be an outsized fraction of the general. With popular documentaries like “The Social Dilemma” additionally to years of user data scandals, it is often assumed that a majority of iOS users will opt-out of Facebook’s tracking.

Facebook has responded by attacking Apple’s decision, stating that it’s getting to negatively affect small businesses looking to advertise on their platform.

This implies that small businesses will be affected by these changes. It’ll have a huge impact on all businesses advertising on the platform.

How to plan around the iOS 14 update:

There is a strategic way around everything.

To thrive through the impacts of the iOS 14 update, you would need to adopt a proactive approach. This would start with making sure you take necessary actions on your Facebook business manager and website.

Here are some simple workarounds for the update within the immediate future would be:

Our team has strategically studied the update and developed a plan to work around within the coming months to assist businesses to weather the storm.

The strategic plan created by The Design Thinking Team would help you mitigate the damage of this update.

All you need to do is connect with us!!