Comic Sans – The font to stay away from 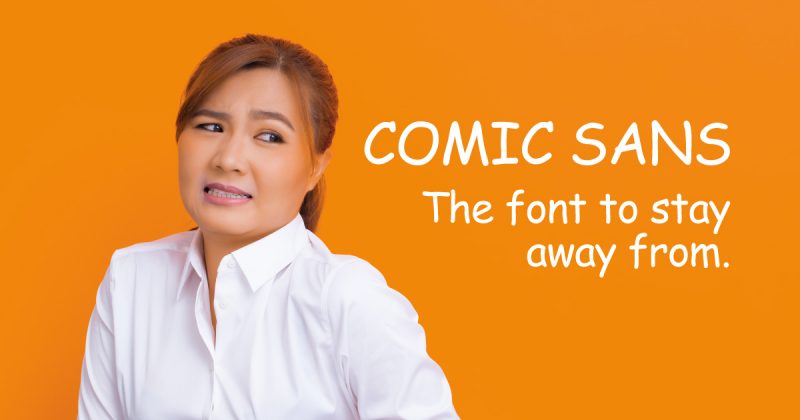 Everyone loves to hate Comic Sans. The child-like handwriting font is so infamous, there have actually been movements to try to ban it. Mention its name to a trained designer and you will most likely receive a look of disgust. So what exactly makes this font so horrible?

Although Comic Sans is one of the most frequently used fonts in the world, it is also widely loathed and even ridiculed. Let’s start with the history of the font. It didn’t begin life to be hated and laughed at. Vincent Connare, who worked at Microsoft, created the font in 1995 to be used in speech balloons in Microsoft’s Movie Maker software. You may notice that a lot of comic strips use the font in characters’ speech bubbles.

Connare developed the font in hopes of creating letterforms that would resemble handwriting to produce a tone that doesn’t feel as official and formal as a font like Times New Roman. Once in the Movie Maker software, Comic Sans made the jump to Windows where it became the default font for everyone to use in any situation. Add in the desktop publishing revolution in the 1990s, and Comic Sans made the perfect, friendly font for all non-technical people to use.

So what is it about Comic Sans people hate? The biggest reason is because almost everyone uses it everywhere with very little thought or care. But why do people use it so much? It’s possible that they look through all of the fonts and Comic Sans is just the least threatening, which works well for their presentation, sign, or document they are creating, which is also meant to be non-threatening and less formal.

A more interesting reason many designers tend to dislike Comic Sans has to do with the font itself. Some argue that the first few letters – a, b, c, d, e – appear to be based on a circle without much variation. This font also can’t be manipulated as easily as other fonts, in a process called kerning, which is critical when you try and fit copy to a defined horizontal or vertical space in a print or online document.

It’s time to step away from Comic Sans and experiment with some other fonts. If you want your brand to stand out from your competitors and convey the appropriate tone to express your message to your target market, contact Design Thinking today. Our experienced designers will not only determine the most suitable font for your brand, but can help take your business’ marketing game to a whole new level.